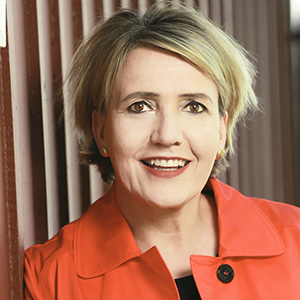 Dr. Simone Peter, who holds a doctorate in biology, found her way to renewable energy by working for the European Renewable Energy Association (EUROSOLAR) in Bonn from 2001 to 2004 and as managing director and project manager of the Renewable Energy Agency in Berlin from 2004 to 2009. From 2009 to 2012, she was Minister for the Environment, Energy and Transport of Saarland in the Müller III and Kramp-Karrenbauer I cabinets; from 2012 to 2013, she was a member of the Saarland state parliament as deputy chair and parliamentary manager of the Bündnis90/Die Grünen parliamentary group; and from 2013 to 2018, she was federal chair of Bündnis90/Die Grünen. Since March 2018, she is President of the German Renewable Energy Federation (BEE) and Chairwoman of the Renewable Energy Agency (AEE) in Berlin, and since September 2020, Vice President of the Austrian Energy Agency (AEA) in Vienna. She is also a member of the Scientific Advisory Board of IZES gGmbH and a member of the Supervisory Board of NATURSTROM AG.

Simone Peter has been President of the German Renewable Energy Federation (BEE) e.V., the umbrella organization of the renewable energy industry, since March 2018. With a doctorate in biology, she was Federal Chairwoman of BÜNDNIS 90/DIE GRÜNEN from 2013 to 2018 and Minister for the Environment, Energy and Transport of Saarland from 2009 to 2012. Prior to that, she worked for the EUROSOLAR association (2001-2004) and co-initiated the Renewable Energy Agency in 2004, where she served as its first executive director.